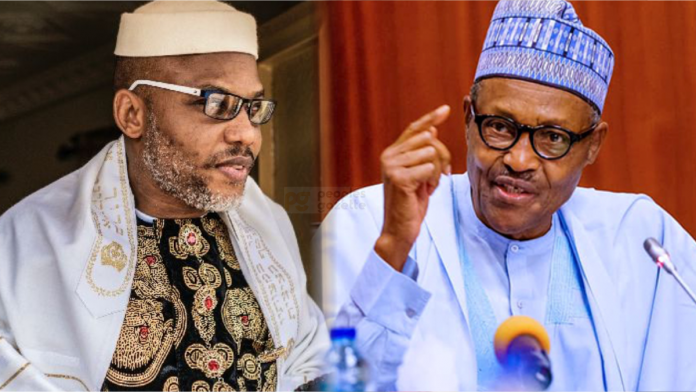 President Muhammadu Buhari has ruled out the bail option for the leader of the proscribed Indigenous Peoples of Biafra (IPOB) Nnamdi Kanu. Instead, the Buhari insisted that the IPOB leader should “justify all the uncomplimentary things he had been saying against Nigeria in Britain”.

“He felt very safe in Britain and said awful things against Nigeria. We eventually got him when he stepped out of the United Kingdom, and we sent him to court,” Buhari said during a bilateral meeting with British Prime Minister Boris Johnson on the margins of the 26th Commonwealth Heads of Government Meeting (CHOGM) in Kigali, Rwanda. “Let him defend all that he has said there. His lawyers have access to him. Remember he jumped bail before, how are we sure he won’t do it again if he’s admitted to bail?”

According to a statement by presidential spokesman, Femi Adesina, Buhari also ruled out seeking a third term in office, claiming the person who attempted it did not end well in what many believe is a subtle reference to former President Olusegun Obasanjo. “Another term for me? No!” he maintained. “The first person who tried it didn’t end very well.”

Aside from this, Johnson and Buhari also discussed security issues in Nigeria with the Nigerian leader linked the renewed wave of crimes in Nigeria to the crisis in Libya.