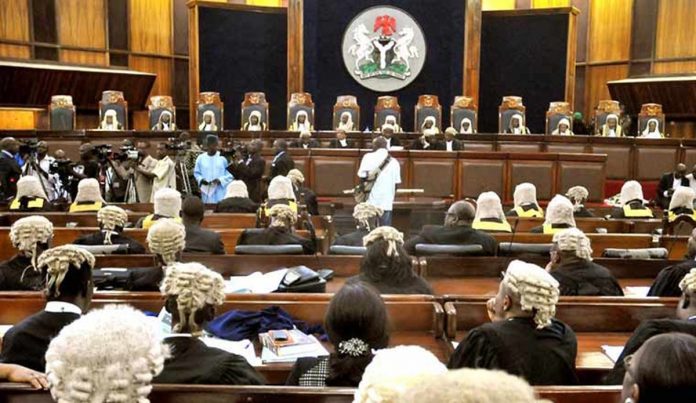 The Senate has resolved to continue with its investigation into the crisis in the Supreme Court despite the resignation of Justice Tanko Muhammad as the Chief Justice of Nigeria (CJN). Lawmakers in the upper chamber of the National Assembly made the resolution during the plenary on Tuesday following a motion moved by the Chairman of the Senate Committee on Judiciary, Human Rights and Legal Matters, Senator Opeyemi Bamidele.

Justices of the Supreme Court had in a petition addressed to the immediate past CJN raised concerns over the deplorable welfare conditions and difficult working environment in the apex court. Days after the development, Justice Muhammad resigned as the CJN on the grounds of ill-health, cutting short his tenure in office which was expected to last until 2023. Barely a day after Muhammad’s resignation, President Muhammadu Buhari swore in Justice Olukayode Ariwoola as acting CJN, being the most senior justice of the apex court.

Addressing his colleagues during Tuesday’s plenary, Senator Bamidele who cited Orders 41 and 51 to move the motion drew the attention of the Senate to the assignment given to the committee at the last plenary, relating to the state of affairs of the Supreme Court. The Senate, in its resolution, mandated the committee to go ahead with its assignment in the quest to find a long-lasting solution by interacting with relevant stakeholders to look into the complaints raised in the petition by the justices.

US Open 2019: Serena Williams wary of ‘fighter’ Elina Svitolina before...