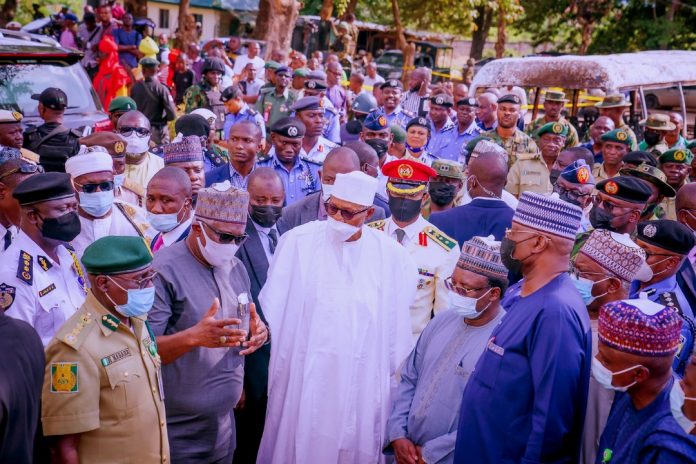 President Muhammadu Buhari has visited the Kuje Correctional Centre in Abuja, the nation’s capital. It had been reported that terrorists attacked the centre and freed inmates including 64 of their members held in the custody during the attack.

Shortly before the President’s arrival, the Minister of Defence, Bashir Magashi, had told journalists that there are strong indications that terrorists invaded the facility to free their members from being held in detention. He explained that the Federal Government is working hard to ensure that other fleeing inmates were being recaptured and kept back in the facility. “Most likely, they are Boko Haram because we have a sizeable number of Boko Harams that are in detention,” the minister said.

“Presently, we could not locate any of them. I think there are about 64 Boko Haram (members) in prison, they have all escaped.” Also, the Nigeria Correction Service, stated that said one personnel of the Nigerian Security and Civil Defence Corps (NSCDC) and four inmates died during the incident.

NCS spokesman, Umar Abubakar, in a statement, said the terrorists used explosives on the centre’s fence and its main entrance to gain access to the facility. Noting that a total of 16 inmates and three custodial officers were injured during the attack, Abubakar stated that 879 inmates escaped from the facility while 443 had been recaptured and 551 are still at large.

2022: Five major areas Nigeria’s loans will be focused on