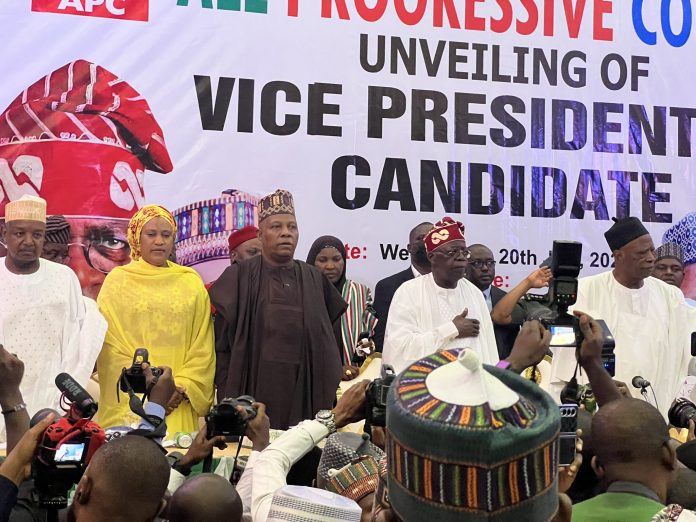 The All Progressives Congress (APC) has unveiled former Borno State Governor, Senator Kashim Shettima as its vice presidential candidate for the 2023 general elections.

The event, which is ongoing at the Shehu Yar’adua center in Abuja, has in attendance the party’s presidential candidate and ex-Lagos State Governor, Bola Tinubu, APC National Chairman, Abdullahi Adamu, and other chieftains.

Tinubu had on July 10, announced the lawmaker representing Borno Central Senatorial District as his running mate, following the resignation of Ibrahim Masari, who served as a ‘placeholder”. The announcement of Shettima has generated a lot of outcry from different quarters, just as it has received support from others. While Tinubu is a Muslim from Lagos, the South-Western region of the country, Shettima is also a Muslim from the North-Eastern part of Borno.

The ruling party had received backlash from concerned Nigerians, religious leaders, opposition parties and the Christians Association of Nigeria. Despite the criticism, Tinubu defended his choice of Shettima as his running mate, saying he has gotten the right qualities to move Nigeria forward. The ex-Lagos State governor also hinged his choice of Shettima for his loyalty to the ruling party.