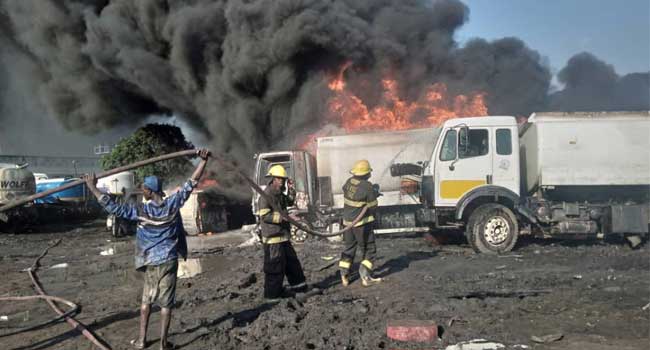 A tanker laden with diesel has exploded in Lagos, destroying several vehicles in the Otto wharf, Mile 2 area of the state. The incident was said to have occurred on Tuesday afternoon at an articulated vehicle motor park in the community.

In viral video clips on Wednesday, several vehicles could be seen burning as fire service officials battled the inferno. The Permanent Secretary of the Lagos State Emergency Management Agency, Dr Olufemi Oke-Osanyintolu, confirmed the incident via a statement, saying the agency activated its response plan after receiving a distress call to the incident.

“Upon arrival at the scene by the agency response team, a fire outbreak from a fuel tanker and drums was encountered. LRT, LRU FIRE alongside LAGS FIRE and FED FIRE are currently battling the inferno to contain it,” he said.

According to Oke-Osanyintolu, all stakeholders were on the ground to stop the fire from spreading further. The Senior Special Assistant to the Lagos State Governor on New Media, Jubril Gawat, also confirmed the incident.