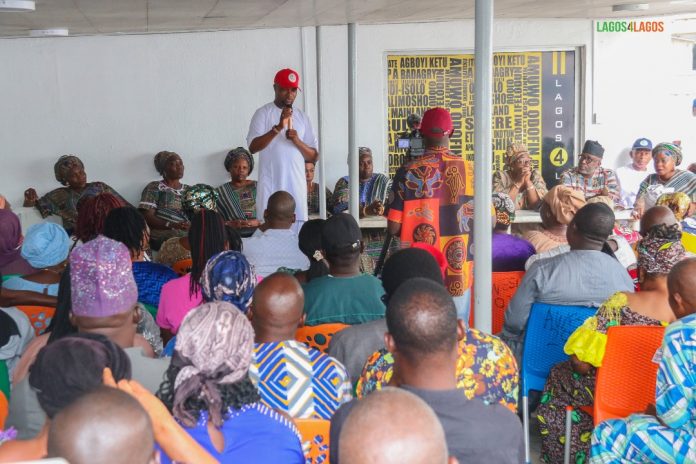 Market leaders from various major markets across Lagos state yesterday made a solidarity visit to the Lagos PDP Governorship Candidate, Dr. Abdul-Azeez Olajide Adediran (JANDOR) to show their unflinching commitment to his vision of offering a breath of fresh air to all residents of the state.

The delegation of market leaders commended JANDOR for leading the crusade to rescue Lagos from the 23 years tyranny of the ruling party and the incessant closure of major markets across the state for flimsy and untenable reasons. They appreciated Jandor for his quest to return the state back to the people, this they said is exceptional and much anticipated.

In his remarks, Jandor appreciated the market leaders for taking such a bold step by publicly identifying with him without recourse to the likely reaction of the vindictive ruling party. He reiterated on his mission to transform Lagos to a truly wealthy state whose wealth will be enjoyed by all residents without any segregation while assuring them of ease of doing business.

Jandor promised them that on no occasion will any market be shut during his administration. “Since the market has it’s own leadership structure, all issues will be adequately handled by the state in conjunction with the market leadership to find solution to any issue instead of arbitrarily closing the market”, he said. He also enjoined them not to be intimated by anyone as the project at hand is a project for every well-meaning Lagosian. He appreciated them for the visit and assured them of continuous interaction and support going forward.

Earlier in the week, JANDOR had played host to various groups on solidarity visits to him including the Dr. Shamsideen Adedosunmu Support Group led by its DG, Hon. Niyi Adams, the state PDP Youth leadership led by the State Youth Leader, Hon. Agboola Akinpelu and Hon. Kazeem Adeyemi, the coordinator of the Forum of LGA Youth Leaders across the 20 Local Government Areas of the state, a group of decampees from the APC named Best Alternative Network led by Hon. Tunde Edward, among other political groups.

‘The most powerful groups are not politicians,’ Buhari congratulates Biden