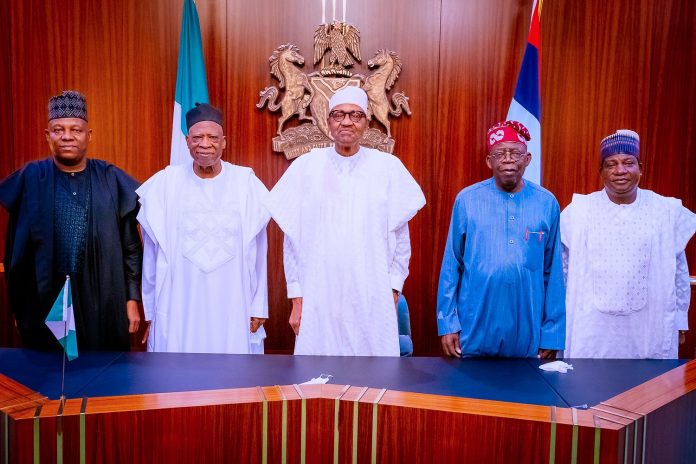 The National Chairman of the All Progressives Congress (APC) Abdullahi Adamu on Thursday unveiled Governor Simon Lalong of Plateau State and Chairman of the Northern Governors’ Forum as the Director General of the party’s presidential campaign organisation.

The National Chairman, who led the presidential candidate of the party Bola Tinubu and his running mate Kashim Shettima to a meeting with President Muhammadu Buhari in his office in Abuja, made the announcement at a briefing. He equally unveiled the Minister of State for Labour and Employment, Festus Keyamo as the interim spokesperson of the Campaign Organisation. Barr Hanatu Musa Musa was named the deputy spokesperson.

According to him, the meeting was to brief the President and get his approval on the party’s plans regarding the campaign outfit and organogram. On the single faith ticket, the APC Chairman appealed to APC members to be patient and watch how the party develops. He noted that the party is sensitive to the concerns of Nigerians and assured that amicable solutions to the various sentiments would be worked out before the commencement of the campaign.

Meanwhile, Governor Lalong stated that he was surprised when he heard the announcement, promising to work along the established structure of the party.

I’M ON STRIKE TOO, SAYS FAYOSE