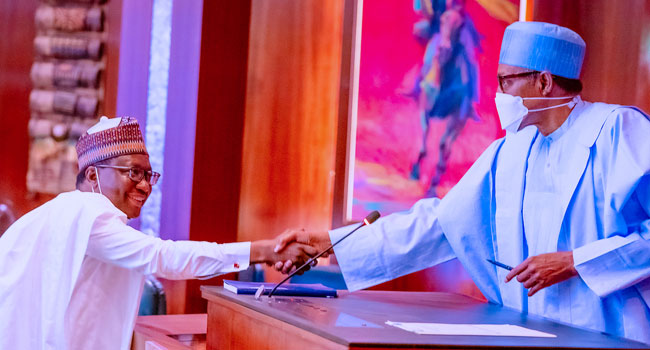 President Muhammadu Buhari on Wednesday swore-in the newly appointed Chairman of the Revenue Mobilization Allocation and Fiscal Commission (RMAFC), Mohammed Bello Shehu. The new RMAFC chairman was administered an oath in the council chamber of the State House in Abuja just before the president presided over the weekly Federal Executive Council (FEC) meeting.

After the brief ceremony, Alhaji Mohammed Bello Shehu told State House Correspondents that although the task ahead of him is daunting, he is certain that the commission will assist the Buhari led administration to block leakages, generate more revenue for the Federation and implement its constitutional responsibility. As one of the 14 constitutional Commissions, the RMAFC chairman maintained that he will ensure that the commission’s independence is upheld as enshrined within the Constitution.