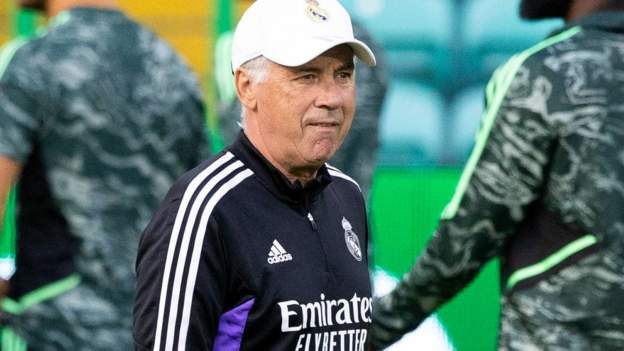 Real Madrid head coach Carlo Ancelotti is “not surprised” the bookmakers make his holders only fifth favourites to win this season’s Champions League.

Bayern Munich, Paris St-Germain, Manchester City and Liverpool are all more fancied as Real open their defence against Celtic in Group F on Tuesday. Ancelotti was reminded that the 14-time European champions were also considered “underdogs” last season. “If anything, it is a good sign,” the Italian replied. “We don’t mind being the underdogs and, if anything, we’ve improved.”

Veteran Brazil full-back Marcelo was among a handful of summer departures, while only France midfielder Aurelien Tchouameni and Germany centre-half Antonio Rudiger have arrived from Monaco and Chelsea respectively. However, Madrid already lead La Liga by two points after four straight victories, including a 2-1 defeat of early challengers Real Betis on Saturday.

Ancelotti’s side visit a Celtic side who themselves have won all seven of their domestic games this season, culminating in a 4-0 dismissal of closest rivals Rangers, and he dismissed the suggestion that the draw had been kind to his side.

Death of Bamise: Jandor commiserates with family of deceased