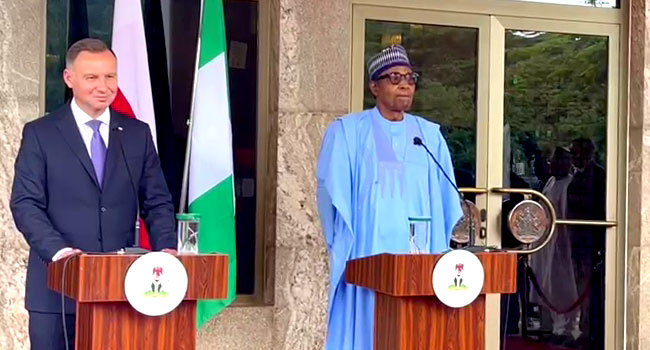 The Federal Government has signed a Memorandum of Cooperation with Poland to address food security crisis in Nigeria and Africa in general. Both countries signed the pact on Tuesday when President Muhammadu Buhari received the Polish President, Andrzej Duda, who was on a state visit to the country.

The Memorandum of Cooperation is targeted at increasing efficiency in Nigeria’s agricultural sector. During his visit to the State House in Abuja, the Polish leader stated that 10 pivotal areas were raised in his conversations with President Buhari, but top among them were the issues of food and energy security.

He gave an assurance that Poland would strengthen its economic relations with Nigeria not only towards addressing food crisis but energy security. This strategic dialogue, according to President Duda, is important for the future of the two nations that are members of the United Nations. Similarly, President Buhari and the Polish leader discussed the supply of both liquefied natural gas (LNG) and oil to Poland and the European Union.

President Duda acknowledged Nigeria’s wealth in these natural resources, adding that supplies of LNG from Nigeria to Poland have already happened.