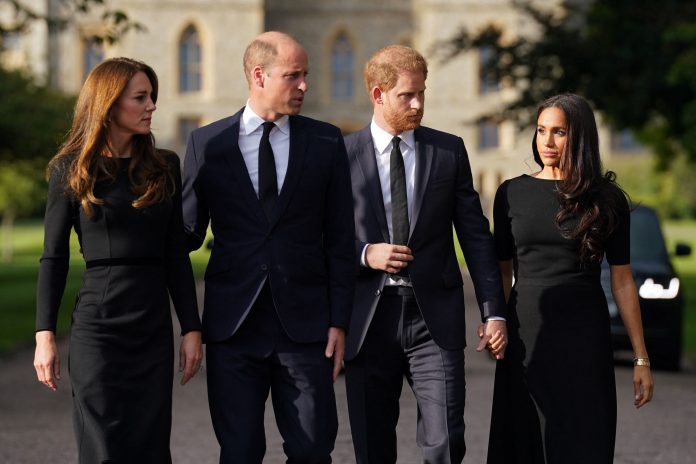 Princes William and Harry and their wives put on a rare united front Saturday to view tributes to Queen Elizabeth II, threatening to upstage their father Charles on the day he was officially proclaimed king. The impromptu walkabout by William and Kate with Harry and Meghan, their first joint public appearance since March 2020, came as royal officials unveiled plans for the run-up to the queen’s state funeral on September 19.

William, who has taken the title of Prince of Wales now his father is king Charles III, earlier broke his silence with an emotional tribute to his grandmother. “I knew this day would come, but it will be some time before the reality of life without Grannie will truly feel real,” said the 40-year-old, the eldest of Charles’ two sons with the late princess Diana. But it was his relationship with his brother Harry, who quit royal life in early 2020 and moved to the United States with his American wife, that looked set to dominate Sunday’s headlines.

The two couples, once dubbed “the fab four”, emerged from Windsor Castle together to inspect flowers and tributes left for the queen, who died on Thursday aged 96 after a record-breaking 70-year reign. They then went to talk to well-wishers on separate sides of the street. In his first speech as king on Friday, Charles had spoken of his love for his son Harry and daughter-in-law, in what was widely seen as an olive branch.

Willian: Arsenal closing in on deal for Chelsea midfielder