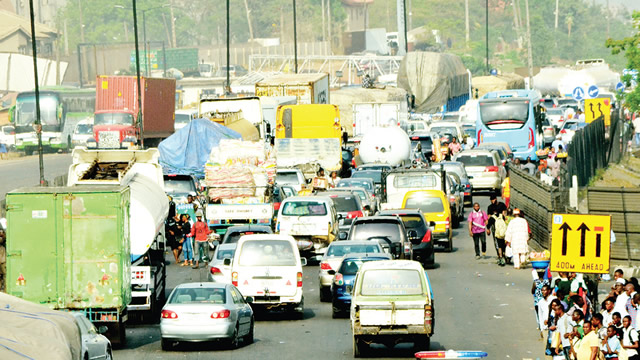 Stranded road users along the Lagos-Ibadan Expressway on Thursday lamented wasted hours in the perpetual gridlock associated with the Kara-OPIC end of the busiest road in West Africa. Some of the motorists who spoke in separate interviews demanded quick action from the Federal Government on the ongoing reconstruction works.

A road user who simply gave his name as John Emmanuel expressed deep-seated anger at the gridlock which has extended to Otedola Bridge. “I was supposed to resume work by 9 am but got to the office by 10 am. I was held up in the traffic for 45 minutes between Berger and OPIC,” he said. Maryam Hussein, whose office is along the Lagos-Ibadan Expressway, said the gridlock has affected her productivity at work.

“I came out this morning but went back because the road was completely blocked on Ogunnusi Road, on both lanes. I can’t go to work because of the traffic. It has greatly impacted my productivity because I want to go to work but can’t work. The government should create alternate routes,” she said. Another motorist who gave his identity simply as Samuel described the situation as horrible, noting that traffic managers were barely seen in action.

“The experience was absolutely horrible, there was nowhere to turn, no alternative route; the roads were blocked. Many people are stuck, and can’t go back. There wasn’t any traffic official to help the situation. You’ll expect that with this type of situation, a lot of people should try to manage the problem but there is limited presence of these officials.

“To make matters worse, nobody has a clue of when this construction work will end. The pace at which they work is confusing; sometimes you pass and there is no work going on. You’ll expect that they will work through the night or significantly at night,” he commented.