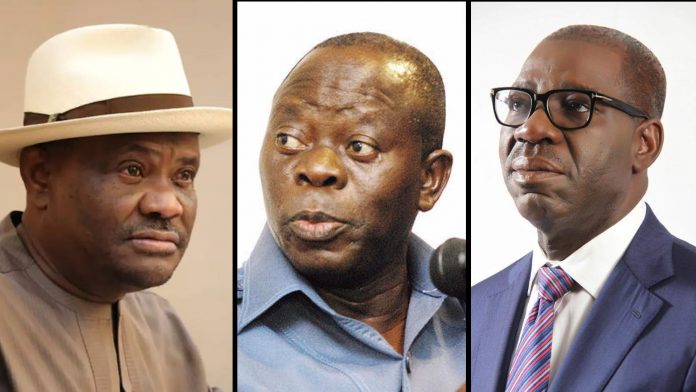 Governor Nyesom Wike of River State on Wednesday apologised to former National Chairman of the All Progressives Congress (APC), Adams Oshiomhole, saying he regretted working for the re-election of Governor Godwin Obaseki of Edo State in September 2020.

Wike tendered the apology to Oshiomhole at the inauguration of the Rumuepirikom Flyover in the Obio-Akpor Local Government Area of the state which the ex-APC chairman commissioned. “We are now friends, let bygones be bygones,” Wike told a smiling Oshiomhole. Oshiomhole, who was Edo governor between 2008 and 2016, handed over to Obaseki who was then a member of the APC.

The two men, however, fell apart due to intra-party squabbles and Obaseki couldn’t secure APC ticket to return to office in 2020 gotten by Osagie Ize-Iyamu. Obaseki moved to the Peoples Democratic Party (PDP) and joined forces with Wike as seen by his many visits to the Rivers strongman’s residence during the crisis preceding the Edo State Governorship Election in 2020. The Edo governor subsequently got the PDP’s governorship ticket and defeated Ize-Iyamu who was backed by Oshiomhole and other APC stalwarts including former Lagos State governor, Bola Tinubu and President Muhammadu Buhari.

Of late, Obaseki and Wike have been at loggerheads amid a crisis rocking the PDP as the former backed PDP presidential candidate, Atiku Abubakar whilst Wike continued to demand the resignation of Iyorchia Ayu as a precondition to support Atiku’s presidential ambition for 2023.

12 years after, NLNG board vote to construct multi-billion-dollar gas pipeline...