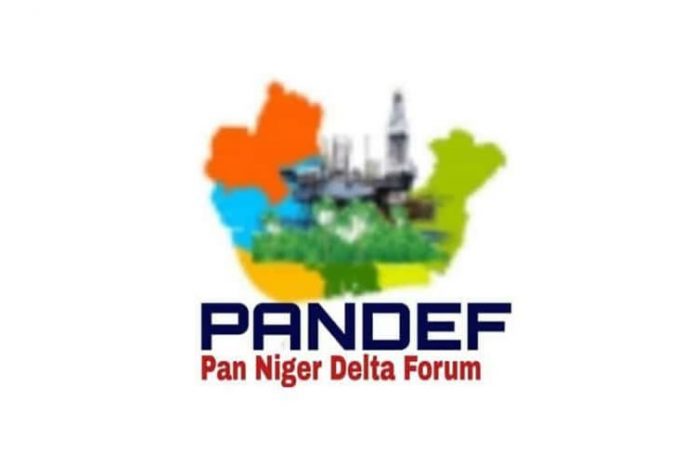 The Pan Nigeria Delta Forum (PANDEF), has commended President Muhammadu Buhari, for rescinding the decision to wind down the Presidential Amnesty Programme (PAP). National chairman of PANDEF, Senator Emmanuel Ibok Essien, gave the commendation when he led other executive members of the group on a courtesy call to PAP’s Interim Adminstrator, Maj-Gen. Barry Ndiomu (rtd), in Abuja. This is contained in a statement signed by the Special Assistant on Media to Interim Administrator Thomas Peretu.

Senator Ibok Essien, pointed out that reports of the planned wind down sparked anxiety and increased tension among the people and would have destroyed the existing peace in the region. He stated that “by suspending the plan, President Buhari displayed how sensitive he is to issues of the Niger Delta and his commitment to the peace and stability of the region. While congratulating Ndiomu on his appointment, the leader of the apex- Niger Delta socio-cultural body, informed the PAP boss that their visit was part of the continuous engagement with stakeholders.

He also commended Ndiomu for his patriotism and courage in consulting with stakeholders and for listening and communicating the right feedback to the federal government since his assumption. He said: “The visit is in furtherance of our resolve to continuously engage with critical stakeholders of the Niger Delta region which the amnesty is a very serious part of it. “We congratulate you on your appointment and thank you for what you have been doing which includes making the right feedback available to the government since you assumed office, which led to the stoppage of plans to terminate the amnesty programme”.

Responding, Ndiomu lauded PANDEF for the visit and for promoting the interest of the Niger Delta through sound advocacy and expressed his willingness to work with them to achieve his mandate for the PAP. He noted that the visit was an opportunity for him to state in clear terms some falsehood and misconceptions about the new policy direction of the PAP. Ndiomu said: “I was excited when I received the message that PANDEF executive is coming to visit us because for me it was an opportunity to correct some impressions to the people, I believe are our political leaders, those who are responsible for directing the pace of affairs in the Niger Delta. So, I thank you very much for coming.

‘’Let me begin by saying when I was appointed by the government, I was given a clear directive to wind down the system and the reason was that the programme itself was not to run forever. “The model that dictated the establishment of this programme was borrowed from the United Nations; it is a model that has been applied in all conflict zones across the world to achieve certain objectives within a period of time.” Ndiomu further said that the Presidential Amnesty Programme was originally to terminate by 2015 from the inception in 2009 but ‘’the President then in his wisdom decided that certain persons that were not captured should be captured, that brought about the concept of impacted communities”.

2023: Why APC is shying away from Buhari’s records – Aniagwu

OSINBAJO TO INAUGURATE PROJECTS IN LAGOS