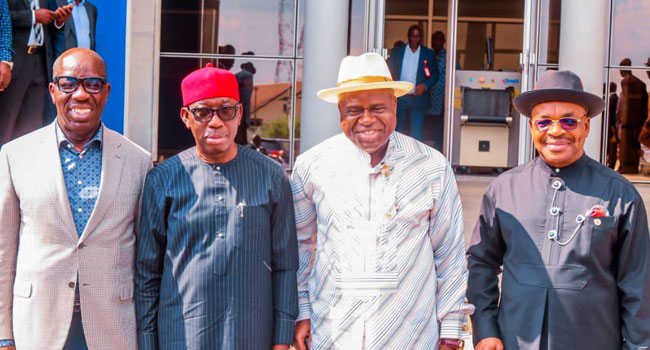 Governors of the Peoples Democratic Party (PDP) in the South-South met in Yenagoa, the Bayelsa State capital, on Wednesday, and backed the candidacy of the party’s presidential candidate, Atiku Abubakar and his running mate, Ifeanyi Okowa. The governors include Godwin Obaseki (Edo), Ifeanyi Okowa (Delta), Udom Emmanuel (Akwa Ibom) and the host Duoye Diri (Bayelsa).

However, Rivers State Governor, Nyesom Wike was conspicuously absent at the meeting. Wike is spearheading the G5 group aggrieved over the emergence of northerners as the PDP presidential candidate and the party’s national chairman (Iyorchia Ayu). They have repeatedly demanded the removal of Ayu for a southern replacement.

Addressing journalists after the meeting, Obaseki said the meeting was to support Atiku and Okowa ahead of the 2023 general elections. He noted that the party’s regional governors also met in Bayelsa to commiserate with their colleague whose states was ravaged by floods recently.

“We have a PDP South-South Governors Forum and our vice presidential candidate, Dr Ifeanyi Okowa is our Chairman and we decided to host a meeting of the Forum in Bayelsa this evening to have an opportunity to come and visit our brother who has gone through so much in the flooding crisis we have here,” he said.

Bandits should be declared terrorists, El-Rufai to FG

Nigeria to play Tunisia in AFCON second round