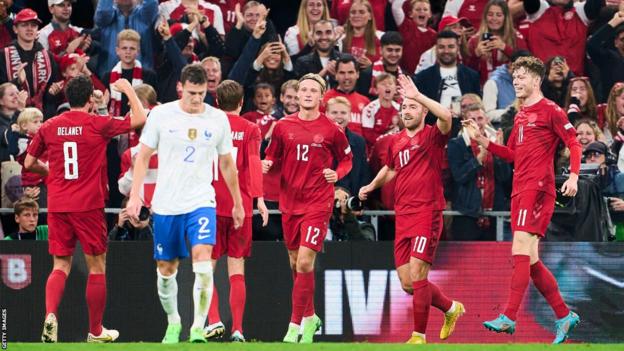 France are hoping to avoid a third defeat by Denmark in the same year and secure qualification with a group game to spare at the World Cup. Didier Deschamps’ side are top of Group D and will progress to the last 16 with victory on Saturday (16:00 GMT).

The past two meetings between the sides in the Uefa Nations League in 2022, have been won by Denmark, with France conceding two goals in both matches. “They are underestimated as a team,” said Deschamps. “We are talking about a four-month period where they beat us twice and made life very difficult for us. We will have to make sure that’s not the case [on Saturday].

“It is not a question of revenge because we know the Danish players and they know us. They can change system from one match to the other and that can give us different types of difficulties.” France captain and goalkeeper Hugo Lloris said the World Cup in Qatar was “a different competition”, but added that previous defeats show the strengths of Denmark. The defending world champions have never lost to a team three times in the same year, but Lloris warned that Denmark are “capable of beating the best”.

“It gives you an idea of the level of this Danish team. It’s a wake-up for us. We don’t need any extra motivation. We are fully aware of the importance. “We know it will be a decisive game for qualification. Every team is in a good place physically and athletically. We know it will be a big challenge – and we have to be ready.”