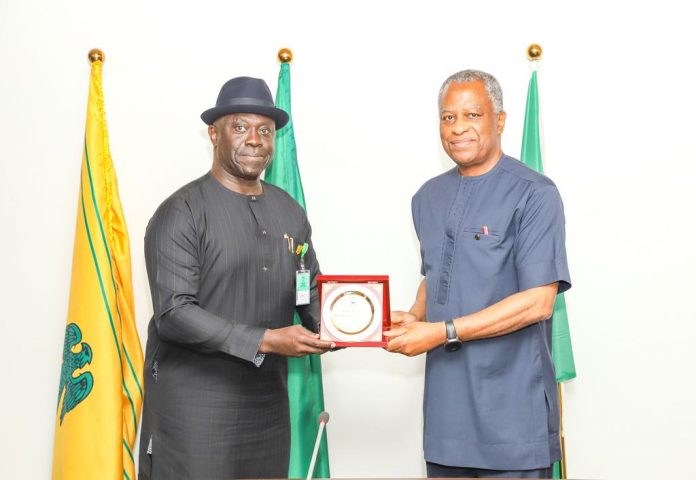 The Presidential Amnesty Programme has retraited commitment to continue to explore ways of strengthening its partnership with Nigeria’s Ministry of Foreign Affairs, in the area of education and vocational training abroad for Niger Delta ex-agitators. Interim Administrator of the Presidential Amnesty Programme, PAP, Major General Barry Ndiomu (rtd) made this know at a strategic meeting with the Minister of Foreign Affairs, Geoffrey Onyeama at his office in Abuja. The visit according to the PAP Boss was informed by the need to show appreciation for the enormous support the presidential amnesty Programme has enjoyed from the Foreign Affairs Ministry over the years.

Ndiomu who described the Foreign affairs ministry as a strategic partner, noted that successes recorded by his agency would not have been possible without the support of the ministry which according to him has made valuable contributions especially in the area of facilitating several training programmes abroad for the primary beneficiaries of the Amnesty Programme. ”Your ministry has been responsible for assisting us with our activities in relation to the deployment of our students overseas, payment of their school fees, ensuring their welfare and more recently, I would like to thank the Honourable Minister for the support provided to our students during the time of the crises in Ukraine as they were successfully evacuated, and we are most grateful”, he said.

Ndiomu used the occasion of the visit to intimate the Foreign affairs minister on the current status of the Presidential Amnesty Programme, saying that Government’s decision to suspend earlier moves to wind down the programme was welcomed by Niger Delta Stakeholders who believe that PAP is still much relevant to the sustenance of peace in the region and the country in general. ”At the time I was appointed, my mandate was to wind down the programme and I engaged the stakeholders by visiting the region and talking to the different categories and classes of people, the ex-agitators themselves, traditional institutions, the leaders across the Niger Delta region and it became apparent that they were certainly not prepared for the abrupt truncation of the PAP because we also found out in the course of the engagement that most of the objectives for which the programme itself was establish had not actually been realized and we need to review that position and I have to return to the government to advise them accordingly.

”Fortunately, the government gave a listening ear and decided to suspend the idea of an abrupt end to the Amnesty Programme. Now, we are trying to reposition the programme in such a way that we can move gradually towards exiting the ex-agitators who have been captured in the programme by ensuring they are trained”, Ndiomu added. Responding, the Honourable Minister of Foreign Affairs congratulated the Interim Administrator, PAP on his appointment and thanked him for the services he has rendered to the country in the past.

“I want to thank and congratulate you for the services you have rendered in the past to the country and that you continue to render now in this new capacity. To also congratulate you on your appointment as the Interim Administrator for the Presidential Amnesty Programme and it is interesting listening to what you have said about the programme and where it is at the moment.”

DSS to clampdown on agents of anarchy, warns against inciting utterances

Ahead of Council Elections, FCT police relaxes restriction of movement