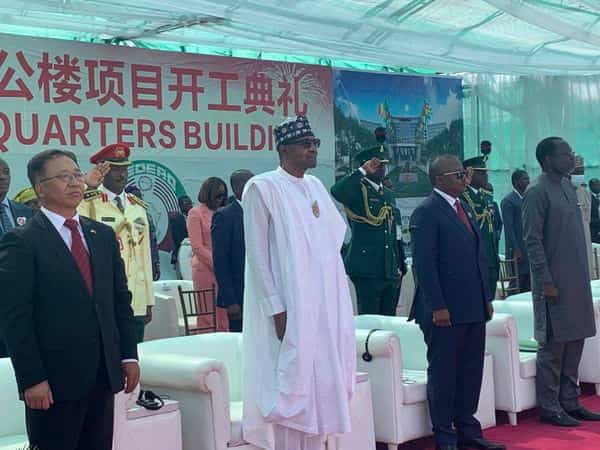 President Muhammadu Buhari has performed the official ground-breaking ceremony of the new ECOWAS Headquarters complex also known as the Eye of West Africa, to be constructed by the Chinese Government.

President Buhari declared that the edifice will strengthen the brotherhood of African countries. The building which comes in the aftermath of engagements and an agreement between the Peoples Republic of China and ECOWAS was envisioned as an all-inclusive architectural phenomenon. It would represent the three hundred and eighty million West African Citizens and would house the three major ECOWAS Institutions, including the ECOWAS Commission, the Community Court of Justice and the Parliament.

President Buhari was accompanied by the Chair of the Authority of ECOWAS Heads of State and President of Guinea Bissau, Mr. Sissoco Embalo; President of the ECOWAS Commission, Doctor Omar Alieu Touray; Ambassador Representing the Government of Peoples Republic of China; Permanent Representatives and Members of Diplomatic Corps as well as Heads of ECOWAS Institutions and Commissioners to the ceremony at the Airport road in Lugbe, Abuja.