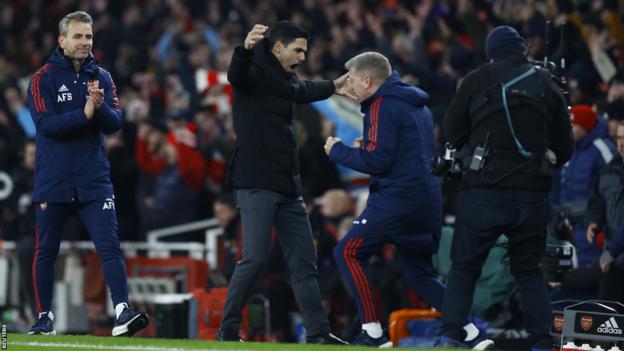 Arsenal manager Mikel Arteta said it was a “beautiful moment” when Eddie Nketiah grabbed a dramatic late winner against Manchester United. The game looked like it was heading for a 2-2 draw after Lisandro Martinez equalised for Erik ten Hag’s side.

But Nketiah – who also scored in the first half – netted in the 90th minute to keep the Gunners five points clear at the top of the Premier League. “I really enjoyed it,” Arteta told BBC Sport. With the pressure on Arsenal following Manchester City’s 3-0 victory over Wolverhampton Wanderers earlier on Sunday, Nketiah’s winning goal from close range was met by rapturous scenes inside the Emirates Stadium.

Arteta added: “It was a beautiful moment at the end and we get going with our people behind us. It was beautiful.” They had to wait for confirmation they had secured all three points, however, following a video assistant referee check to determine whether Nketiah was onside. Arteta admitted even he was not sure whether the crucial goal would be given.

“[The officials] were looking at something we hadn’t seen and we very relieved,” said the Spanish boss. “We got to celebrate twice.”