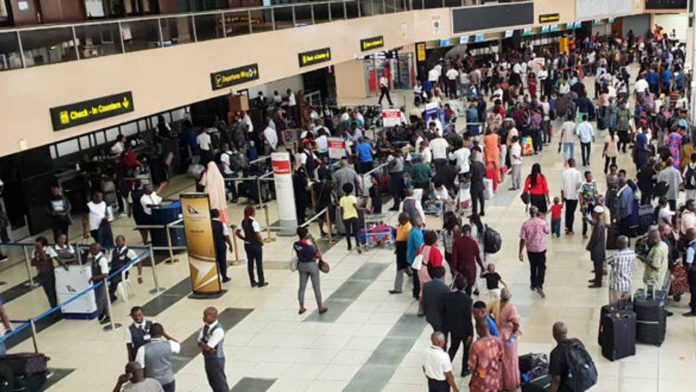 Scores of international passengers at the Murtala Muhammed International Airport in Lagos are stranded as ground handlers of the Nigerian Aviation Handling Company (NAHCO) embarked on industrial action on Monday.

The protesting ground handlers are asking for increased salaries and other improved welfare conditions. NAHCO had reportedly gone to court and obtained an injunction stopping the workers from embarking on strike. An official of one of the unions at the airport, the Air Transport Services Senior Staff Association of Nigeria (ATTSSSAN), confirmed the strike but said the industrial was embarked upon by the workers and not by the union.

The National Union of Air Transport Employees (NUATE) had in a statement last week directed its members to withdraw services from the airport. “In the above regard, all NAHCO staff are hereby directed to withdraw services with effect from Monday 23, 2023. This action shall be definite until otherwise directed by the secretariats of the unions,” the notices read in part. Efforts to speak with a spokesperson for NAHCO proved abortive as of press time.

Some of the flights disrupted so far by the industrial action include those of Royal Air Maroc which was stopped by protesting ground handlers around 2am on Monday. Also affected was that of Qatar Airways. NAHCO handles check-in, boarding and ramp services for many international airlines including Qatar Airways, Ethiopian Airlines, Air France/KLM, Delta Airlines, Virgin Atlantic, Turkish Air as well as several Nigerian airlines including Air Peace.

The industrial action coincides with a state visit by President Muhammed Buhari who is expected in Lagos on Monday and Tuesday to commission some projects.

Liverpool: Trent Alexander-Arnold could be one of best ever – Gary...