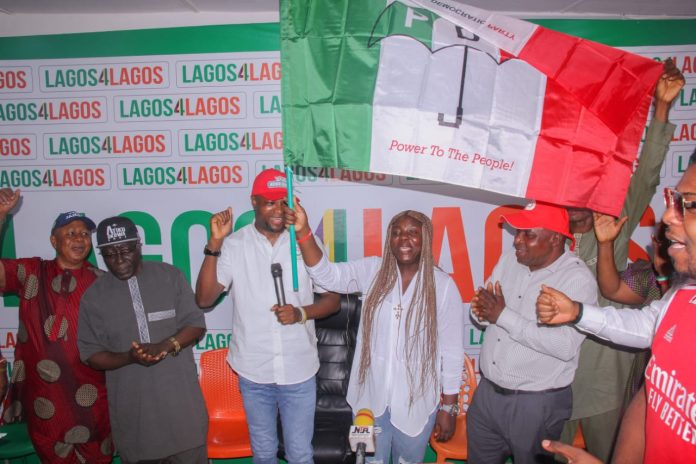 Leadership and members of the Social Democratic Party (SDP) in Lagos State today collapsed the party structure into the Peoples Democratic Party (PDP) ahead of the 2023 general election. The State Chairman of the party, Ms. Dabiraoluwa Adeyinka who led members of the party’s state working committee and other leaders of the party to defect to the PDP revealed that the leadership qualities of the governorship candidate of the PDP, Dr. Abdul- Azeez Olajide Adediran (JANDOR), his running mate Olufunke Akindele and the party’s House of Representatives Candidate in Eti Osa Federal Constituency, Hon. Olubankole Wellington, Bankky W attracted them to the PDP as the only credible alternative to the inept ruling APC.

While receiving the delegation at his campaign office, Dr. Adediran commended the defectors for taking a wise decision at the right time in the collective interest of the good people of Lagos State who have suffered untold hardship under the APC-led government.

The Lagos PDP Chairman, Hon. Philip Aivoji presented the party’s flag to the delegation and assured them that they will not experience any act of discrimination in the party when the PDP forms the government on May 29, 2023. “We want to assure you that once you join the PDP, you have become a bonafide member and you are entitled to all rights and privileges enjoyed by those you met in the party. You are free to participate in party activities at the units, wards, local governments, and the state,” he said.

In line with this, the party’s Governorship Candidate, Dr. Abdul-Azeez Olajide Adediran (JANDOR) announced the appointment of Ms. Dabiraoluwa Adeyinka as one of the spokespersons for his campaign council. She joins other spokespersons earlier appointed by the Governorship candidate to keep the electorate updated about the goings-on in the campaign.