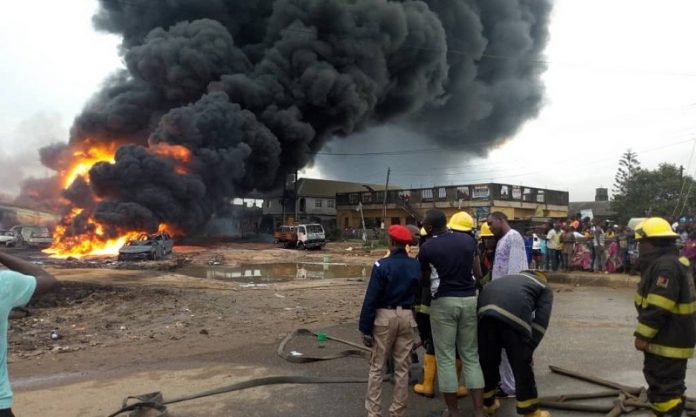 Two people died and 30 vehicles were burnt in a pipeline explosion in Ijegun area of Lagos State, LASEMA has said.

The spokesperson for the agency said the total loss would be determined at the end of the ongoing firefighting operation.

He noted that the explosion occurred when security agencies intercepted the vandals in the act.

He said, “On arrival of the LRT at the scene of the incident, it was gathered that some vandals were engaged in illegal bunkering activities at Fire Junction, Ijegun, within the vicinity where NNPC pipelines were buried.

“The vandals had already siphoned petrol into a 33,000 litres tanker while a second tanker of the same capacity was being loaded when security agencies suddenly intercepted them.

“While trying to escape, some of the siphoned fuel spilled into the drainage and the vandals were alleged to have set the spilled fuel on fire in a bid to deter the security agencies from apprehending them.

“The fire eventually returned to the pipeline point where the vandals siphoned the fuel and exploded with escalating fire which led to two fatalities and over 30 vehicles burnt.

“The actual loss will be determined upon conducting post disaster enumeration after the fire has been put out.”

He noted that responders at the scene included men of the Lagos State Fire Service, Nigeria Security and Civil Defence Corps and the police.

The spokesperson for NEMA, Ibrahim Farinloye, said the safety of firefighters needed to be assured before the fire would be put off.

He said, “Pipeline fire is a specialised fire management; not all firemen can handle it.

“NNPC safety firemen are specially trained to handle such delicate incident and that is why NEMA mobilised the NNPC to the scene.

“It will take time before the inferno can be tackled until the supplies from the pipeline is weak and disabled when supplies are shutdown and the main source and valves closest to the scene.

“In as much as lives and property of the people are not threatened, the fire will be put off as soon as the safety of the fire officers are also assured.”

‘No winners in cycle of violence’: Buhari condemns killings in Benue,...