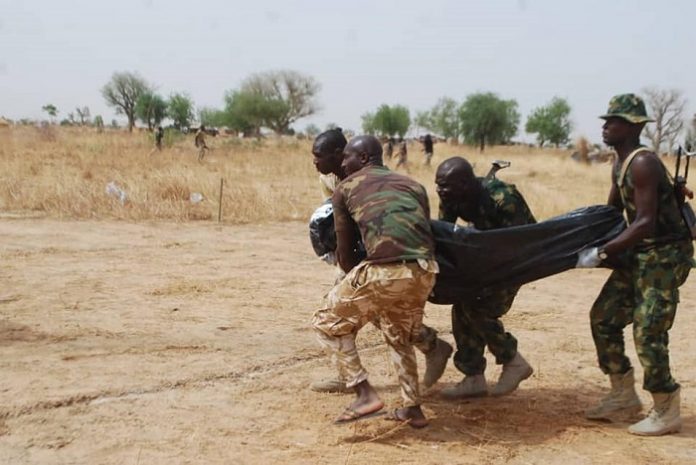 At least three Nigerian soldiers were killed, while four suffered critical injuries after a roadside bomb ripped through a military convoy on Monday morning, Premium Times is reporting.

A lieutenant-colonel was amongst those killed in the attack, alongside his driver and orderly.

The development marked the latest loss for the military, which has grappled with a prolonged insurgency in Nigeria’s northeastern region since 2009.

The loss of the lieutenant-colonel came roughly six months after the army lost Ibrahim Sakaba, a lieutenant colonel and troop commander, in the battle that claimed nearly 120 soldiers in Metele, Borno State.

Premium Times said it withheld the slain commander’s identity to allow the military the needed time to formally notify his loved ones.

The officers of 145 Task Force Battalion were on an anti-terrorism patrol when an improvised explosive devise planted by Boko Haram terrorists went off in Borno State at about 9:30 a.m. Monday, military sources with knowledge of the incident said Monday night.

The attack occurred along Mauli-Borgozo Road, which is one of the few settlements where Boko Haram elements continue to hibernate in the restive North-east, sources said.

A reinforcement was dispatched from 29 Task Force Brigade in Benisheikh and 154 Task Force Battalion to recover bodies and rescue the wounded soldiers.

The status of the rescue operation could not be immediately ascertained as of press time Monday night.

Two gun trucks and a Tata truck were amongst the military hardware damaged by the explosion, sources said.

Security level was immediately heightened, it was learnt.

A spokesperson for the Nigerian Army did not immediately return requests for comments on Monday night. The military has not issued a public statement about the development as of 7:30 p.m. Monday.

The attack came as Nigerian troops were regaining control of vast areas where pockets of insurgents were still hibernating between Borno, Yobe and Adamawa, the three states worse hit by the 10-year-long insurgency.

At least four Boko Haram suspects were killed during battles to fortify some villages in Borno; the military said at the weekend.

Buhari’s Govt not a threat to the media – Lai Mohammed