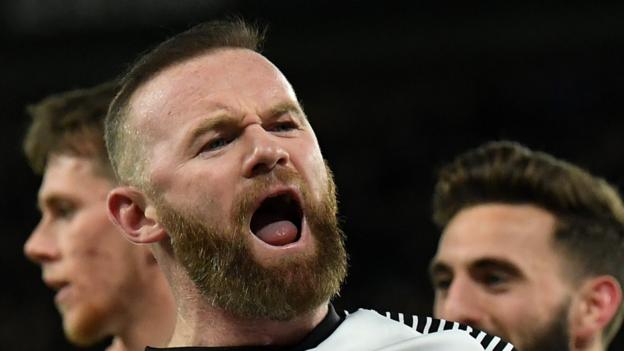 Wayne Rooney will be “relishing” the chance to face Manchester United once again and will coach for years to come, says former team-mate Michael Carrick. Rooney, 34, is back in England with Derby County who host the 12-time winners in the FA Cup fifth round on Thursday.

“It will be strange I’m sure for him,” Carrick said. “But I’m sure he’s relishing it at the same time. “You wouldn’t expect him to come back and play back in England again.” United’s leading goalscorer Rooney left Old Trafford in 2017 after 13 years and spent a season back at boyhood club Everton before heading to DC United in Major League Soccer.

In January he returned to England to take up a player-coach role alongside Phillip Cocu at Derby, and Carrick – on the coaching staff with United – expects Rooney to continue behind the scenes. “He knows the game so well, he’s intelligent on the pitch, and he’s gone on to lead like he did in his final years at United.

“As one of the older ones in the dressing room with me, he definitely took that role on. Therefore it wouldn’t surprise me if he stayed in the game for a long time. “He was just an incredible talent when he came through, almost freakish in the way he could deal with things and his mentality was incredible.”